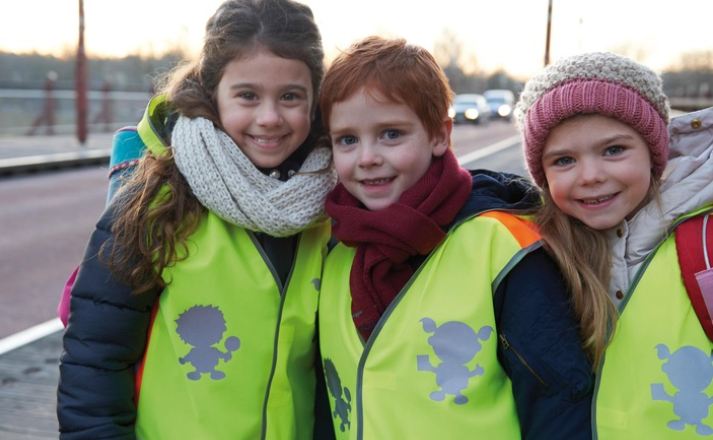 The ADAC Foundation ensures more safety on the road. Above all, the subject of visibility is very important to the foundation, which is based in Munich. Because currently crashed nationwide about every 18 minutes on average, a child in traffic. That is why again this year, around 760,000 neon yellow, reflective safety vests will be distributed to first graders in cooperation with the Deutsche Post DHL Group. At the start of the security action, a big school festival will take place on 18 September 2018 in Bremen. At five hands-on stations, both parents and children can learn more about road hazards and the benefits of reflective clothing. In the form of a roadshow, the exciting stations also go on a tour of Germany for the first time and have already stopped at major city and children’s festivals. The motto of the nationwide campaign is “School in view, Kids in view”.

With the school festival at a primary school in Bremen on 18 September 2018, the ADAC Foundation is launching this year’s safety campaign for first graders. The Bremen Senator for Children and Education, Dr. med. Claudia Bogdan, Dr. Ing. Andrea David, Managing Director of the ADAC Foundation and Oliver Schliebs, Member of the Business Unit Sales Business Unit of Deutsche Post DHL Group.

“Primary school children are particularly vulnerable and therefore need all the support they can give them, and by wearing the safety vest, we want to significantly increase the visibility and thus the safety of the children,” says Dr. Andrea David the idea of ​​the action. Since its beginning in 2010, the ADAC Foundation has already spent more than six million safety vests on first graders with its cooperation partner Deutsche Post DHL.

After the joint start, Bremen will continue with an interactive parent and children’s program. At various interactive stations, the ADAC Foundation and Deutsche Post DHL provide information on road safety and visibility. And of course, the children can also make a souvenir picture with the mascot “Felix and Frieda – the ADAC traffic detectives” at a photo station.

In traffic, it often only takes a few meters and seconds. For example, if a car has to make emergency braking from 50 km / h, the stopping distance is at least 28 meters. However, a child in dark clothes can only be recognized from a distance of about 25 meters. A child with a safety vest can be perceived by motorists from a distance of 140 meters. “For us, it is a matter of the heart to support the ADAC Foundation’s security campaign with our logistical know-how once again this year, and of course seeing that the wearing of the reflective vests with reflective tapes significantly increases the safety of children, we naturally want to make sure of that That first-graders get the vest all over Germany, “said Oliver Schliebs the commitment of the logistics company.

Roadshow through Germany sensitizes for visibility in traffic

Even more educational work on the topic of safety and visibility in road traffic is the first time the ADAC Foundation has been involved in a roadshow this year. At city and children’s parties, playful tips are given on how to behave properly in dangerous situations and how hazards are practiced on the way to school. The last stop will be the Roadshow on October 7, 2018, at the Juki in Munich.

About the ADAC Foundation:

The non-profit and charitable ADAC Foundation funds research and education measures to prevent accidents: scientific findings are intended to increase road safety and amateur motorsport safety. Also, the ADAC Foundation sensitizes children and young people with their programs for road hazards. By promoting mobility research, the foundation is helping to make road transport more sustainable. The foundation also supports vulnerable victims with measures that give them back some of their mobility. Another funding priority is the Rescue from Danger of Life with the ADAC Luftrettung gGmbH.