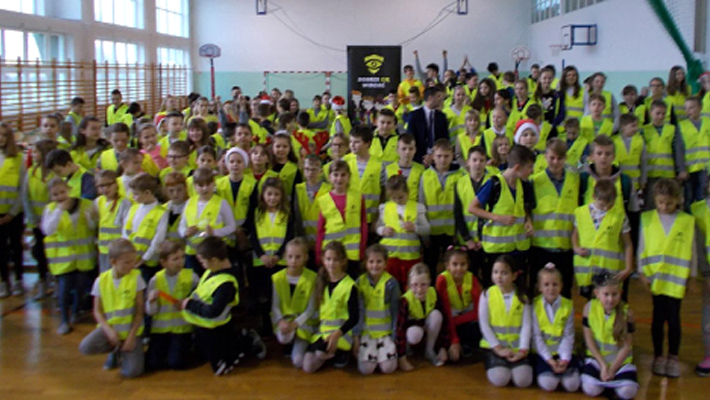 GMINA ZALESIE Pupils from the Primary School took part in the training and received reflective vests that will help them safely participate in road traffic as part of the nationwide campaign “Good to see you”. During the meeting, young firemen were distinguished who presented themselves perfectly during the indoor tournament of Youth Fire Teams.

“Good to see you” is a nationwide campaign co-financed by the Justice Fund, administered by the Ministry of Justice. As part of this initiative, a meeting was held at the school on 6 December, which was led by the founders of the National Day of Life Foundation – Joanna and Gregory.

Schools have been presented spots devoted to road safety. The police officer took the floor, reminding the students of the basic rules of road safety and the necessity of wearing retro-reflective materials after dark. He pointed out that a person equipped with a vest can be seen by the driver from a distance of about 150 m, while a pedestrian without glare is visible only from about 30 m.

During the meeting, all children attending the ceremony received reflective vests with reflective tapes, financed by the invited foundation. A written request was sent to the pupils’ parents to conduct an evening show of the visibility of a person dressed in a reflective T-shirt and without a T-shirt.

Thanks to the initiative of director of the institution, Wojciech, the same actions were carried out in all schools of the commune. Each student received a reflective vest from the foundation.

The second part of the meeting had a slightly different character. Representatives of the Foundation National Day of Life held a talk with students about interpersonal relations. The success of the Youth Fire Brigade was also presented, the composition of which is provided by students of the school. On December 2 young firefighters participated in the II Indoor Sports and Fire Tournament of Youth Fire Teams. Approximately 200 players from MDP in various parts of the country competed in the competitions. The team of girls from the school won second place in the girls ‘girl classification among the guests and third place in the girls’ overall classification.

Representatives of the Foundation National Day of Life gave the director of the Primary School the certificate of “Ambassador of good relations” to Wojciech.