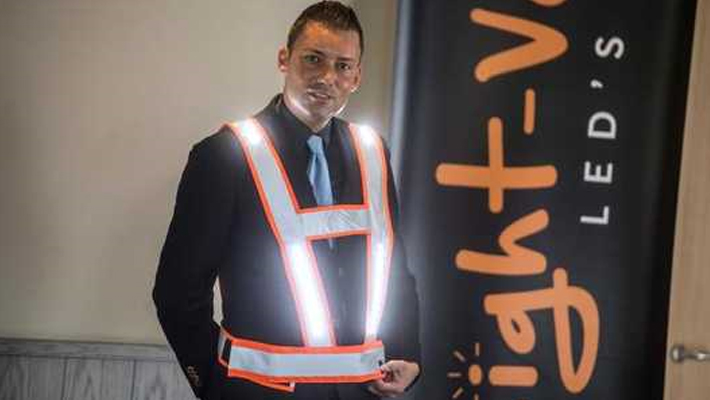 Three years ago, Robbie was painting a wall at home when the power suddenly broke down. In order to have enough light, he hung up a LED pendulum that he had left. “I thought it would be even more convenient to wear the LED lights on my clothes. Then I would have enough light everywhere, “says Robbie. At the kitchen table, he further developed his idea of ​​a safety vest with built-in LED lighting.

The project gained momentum after Robbie spoke about it on a birthday with a firefighter present. “He said that they had been looking for something like that for years. Reflective vests are only visible when light shines on them.” Robbie received business and financial support from his father-in-law and his business partner. The first fifty luminous safety vests were for the Rotterdam fire brigade. Without any marketing campaign, new applications came in from, among other things, shipping and road construction.

The 30-year-old entrepreneur is aware that his idea is actually very simple. “But it was not there yet and there is a lot of demand for it. Just like the paper clip. “He now has a patent and patent on the light vest. The reflective vest has a rechargeable battery that is full within two hours and the LED lights burn for 100 hours. Despite all electronics, it weighs only three hundred grams. According to Robbie, the vests, which are made in factories in Tilburg, cannot be destroyed. “The LED lighting lasts sixty thousand hours and we give a two-year warranty.”

The company has 69 different versions in the range, which can be washed out thanks to a special nano-coating on the electronics. “The color of the vest and the placement and color of the lights differ,” says the young entrepreneur. “For staff who have to crawl through sewer pipes, there are vests with shoulder lighting so they always have enough visibility. The vests for crane operators have red lighting so that they can be clearly seen from the ground. ”

The vest meets almost all known safety labels. Strict requirements apply in that sector, for example, the vest must be explosion-proof. Robbie expects to have this quality mark in early 2018. The company is also in discussion with the army. “We are working on vests in army design. The big advantage for soldiers is that they do not have to carry a flashlight with our vest. That way they have their hands free for other things. ”

Although the product has not been on the market for two years, it is already available in eleven different countries. In the UK and France, the company works with franchisees. Robbie has high international expectations. “In the Netherlands, the streets are well lit, so our high visibility vest here is less necessary than in the rest of the world. We have only been working abroad for half a year, but more than half of the eight thousand copies sold have crossed the border. ”

The entrepreneur hopes with his invention to contribute that within a few years everyone can work safely. “It would be nice if it eventually becomes mandatory.”