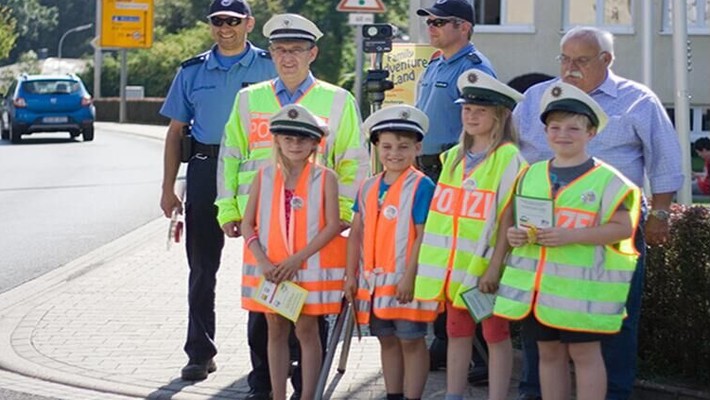 “We are now down in the police car home,” the fourth-grader Max in reflective vest announced proudly. The four fourth graders of Eichberg school had not done anything, but were allowed on the Action participate “Blitz Kids”.

The road safety campaign “Blitz Kids” is a joint cooperation between the police and the ADAC Hessen, which is also the partner supported. In lottery, students were selected. In the morning, four children were allowed to join in and after school again four students. Thus were there two students from all four classes of 4th Eichberg School. “I have broken my lot on the corner, so I already knew that I had won,” smirked Maximilian Zielinski.

Equipped with police hat and safety vest, the children had to hand over the task of some road users either the Green or yellow card. The police conducted previously with several officials’ velocity measurements near school and waved through many riders to the parking lot. The great majority of drivers had driven not too fast. In the action, it was more concerned to drive particularly carefully especially near schools. The driver will be animated in the action for a proactive and considerate driving, said the officials present.

“Blitz Kids”: many Green Cards and praise for the driver

The four students were almost exclusively distribute the Green Card and to thank the traffic participants for their diligence when passing at noon. For Green Card there was also a small packet for drivers. In the morning the students had to simply warn a driver for careless driving with Gleben map. Likewise, there had been only one driver after school in a warning, but drew no fines to be. It was measured at 52 kilometers per hour. Therefore, the driver took his warning of the fourth-graders with humor and joked counter alongside with the officials in safety clothing because he had moved still lower tolerance range. Once again had a lady to point out the use of seat belts officials.

Especially in the first weeks of school after the summer holidays is especially important particularly foresighted driving through the many new first-graders.