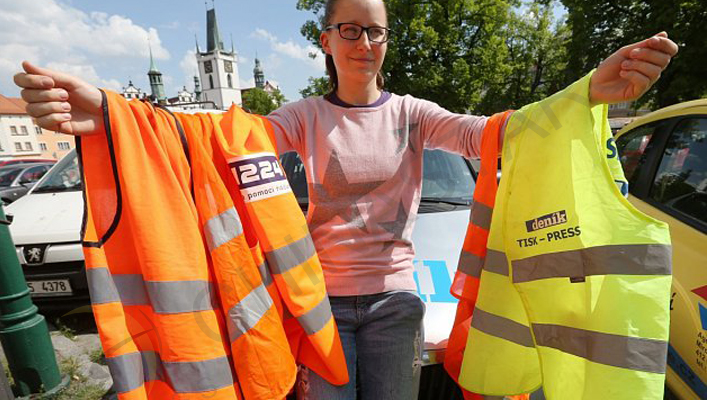 The panic around reflective vests are useless. Transport Ministry responds to information that motorists will have to change old for new reflective vest. “Motorists change warning vests of necessary equipment does not need to,” says the Ministry of Transport.
Panic sparked amendment to the Decree, which implements the rules of road traffic. To it got delayed for several years, specifying the applicable standard form reflective elements.
“From January 1, 2016 is valid in the Czech Republic as part of mandatory equipment for vehicles waistcoat according to CSN EN ISO 20471: 2013,” says Lubomír Demel from the company D.A.S. Shelf, which manufactures first aid kits and car accessories. The amended ordinance and adopted a standard that is valid in the Czech Republic for three years. “The standard EN ISO 20471: 2013, which is harmonized by Government Regulation 21/2003 Coll., Replaced the standard EN 471 1 October 2013,” says George Volejník of trade technickenormy.cz. “It specifies clothes with high visibility, gives the test methods and requirements.”
Previous form ordinance valid until the end of last year, therefore, required to keep under no corrections. The amendment introduced a delay in accordance with the decree and applicable standard.
Kristina Doubravová of Lemac Marketing firm that manufactures reflective elements, states that safety vest and other products made according to the applicable standards EN ISO 20471 since 2013.
The original appearance of the standards by Lubomir Demela knew three grades and luminance reflective elements. “The differences between the stages are really striking,” says Demel. The new standard was canceled for various levels and are clearly specified quality parameters of materials and reflectivity.
“Of the Decree no obligation to change the vest does not,” calms the Ministry of Transport. “The protective properties of the vest that matched an earlier European standard EN 471, are sufficient in terms of safety and meet the technical requirements,” says Thomas Neřold from the ministry’s press department. “It is true that the vest, which is part of the compulsory equipment must comply with European standard EN 471 and EN ISO 20,471th from any enactment but does not mean that older vests filling this standard are not right, and people can use,” he adds.
What standard vest filled, easy to find the label that is sewn to the vest.
“Manufacturers continue to have an obligation to affix CE marking on a product, which expresses conformity with the essential requirements of Government Regulation and the Directive,” says Thomas Neřold. Warning vest with reflective fabric mandatory equipment vehicles but according to the Ministry not among those protective clothing, that according to the standards they must indicate the number (four digit code) notified (authorized) persons assessing conformity with regulations. “This applies to other, specialized, protective equipment,” explains Neřold.
According to one of the dealers reflective elements who do not want to be named, these products are usually tested in Germany.
According to information iDNES.cz on the Czech market objevují products with reflective elements of Chinese origin, which have much less ability to reflect light. He has to go on different tapes and accessories, which since February mandatory for pedestrians (more here).