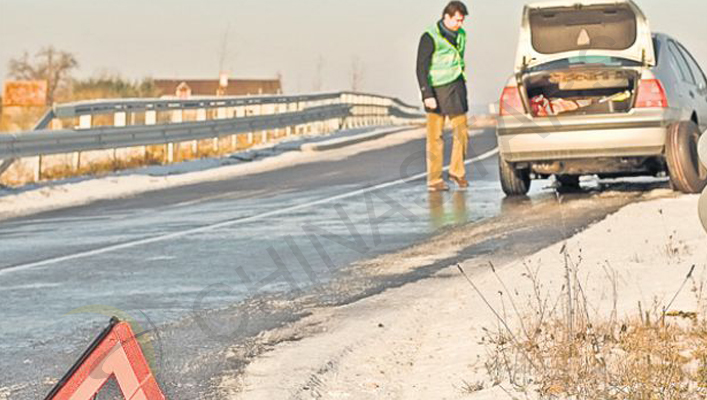 A man aged 70, who was driving a tractor with a trailer loaded with boards, without safety vest unmarked caused a terrible accident, which resulted in the death of a young man aged 18 and wounding of three young people.
The tragedy occurred Friday night, around 22.15, on Route 29, just outside Zvoriştea to Suceava. The four boys were in an Audi car and came to Suceava. Tractor traveling on the same direction of travel, and the driver of the car was unable to avoid impact with the obstacle suddenly appeared in his face.
Carefully crafted trailer, overloaded with wood and without a trace signaling
Ionel Sfichi, aged 18, from Suceava, driving a Audi A4. Beside him in the car were Marius Bernicu, aged 18, from Zvoriştea, passenger seat right front, Petrică Bechiu, 19, and Andrew Barariu, 16, also from Zvoriştea, the last two on backseat.
All four had relatives in town Zvoriştea, and at that time came to Suceava.
Pânzaru Peter, aged 70 years, residing in the village Zvoriştea, driving on the same vein drive a tractor U 445, which tow a trailer unregistered and unrecorded in which they were loaded wood waste. It is a crafted trailer, which has no place on a public road. Because the degree of unconsciousness driver to maximum trailer whose overall cargo was exceeded, it was not indicated in any way.
Terrible death of a young 18
18-year old driver did not see the tractor and went into the wood in the full trailer. The cargo went through the windshield on the passenger side, the whereabouts of the other young man of 18, Marius Bernicu.
One of the witnesses who came first tragedy, Stefan Andriesei, said: “tractor trailer was not signaled and the car without reflective tape went straight into it. I do not think the driver had speed, I was a hundred meters behind him. It could happen to anyone, even if you move and 30 kilometers per hour and woke barrier to face. ”
SMURD medical personnel arrived at the scene could not do anything passenger, who was killed with a serious injury to the head. The other three youths were taken by ambulance and transported to the Suceava County Hospital. They were subsequently diagnosed with injuries serious enough, but are out of danger.
“At least a lousy vest have been hung somewhere …”
Most of the drivers who arrived at the scene were outraged how can die with days on a national road.
“No Signal anything, even a lousy vest have been hung somewhere … My opinion is that any driver could not see the trailer while, especially if you travel by beam. Whatever might die if he had the misfortune to get behind the tractor, “said Sergiu Leontescu.
The driver aged 70 years, relaxed and pathetic justifications

The driver of the tractor, Peter Pânzaru, had a relaxed attitude shockingly spot.
Asked how the accident occurred, he said it must be asked Audi car driver and not him.

“I was right, I was going slowly, regular and load did not exceed triple the tractor. Not seen? “Try to justify driver aged 70 years.
When the journalists insisted with questions related to signaling, it began to laugh and say that journalists ask questions without knowing what it is. The fact is that he, at least immediately after the tragedy, has not committed any fault in the tragedy.
He will be criminally liable for offenses of manslaughter, negligent injury and driving an unregistered trailer.
The trailer had no lighting or reflective vest
The police investigation confirmed that the main blame for the accident belongs to the tractor driver.
Alexander Dutuc assistant inspector within the Office of Suceava Road, said: “From the first checks that the driver of the Audi car hit a tractor trailer, which was not registered and had no lighting or reflectors.”
He added that the tractor driver has a valid driving license for driving agricultural tractors and machinery, and after checking with etilotestul revealed that he had consumed no alcohol.
As it regards the young man who was driving the car Audi, health because it could not be verified etilotestul, but the hospital they have been collected biological samples for determining alcohol in the blood.