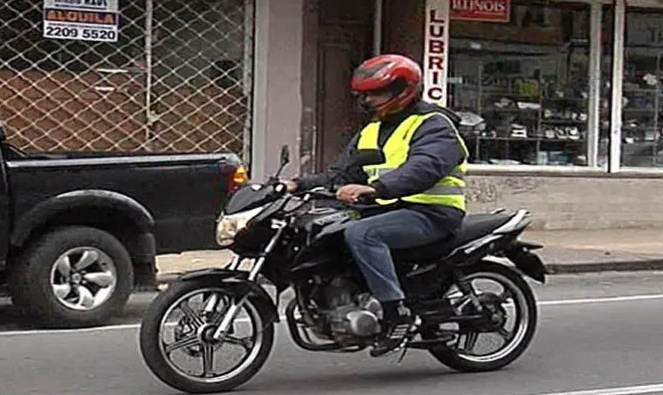 This Wednesday came into force the regulations of the municipality of San Miguel de Tucum án that requires motorcyclists to use this garment as a badge.

The measure created a stir among drivers and divided opinions on different paths.

“The regulatory use of vests is already a fact. Despite the criticism on the streets, drivers have already been seen using them since yesterday and it shows that people are interested in supporting the initiative,” commented the undersecretary of Transit and Transportation of the capital’s Municipality Enrique Romero.

Also, the official stressed again the intention to care for the lives of the driver and pedestrians above all else.

“We don’t put numbers on reflective vests or anything like that. What we seek is to improve road safety,” argued Romero. In this way, it differed from what is done in the province of Buenos Aires, where the motorcycle patent must appear on the vest by law.

In several businesses in the field, as it was found on Monday, the reflective vests had been sold out, and merchants were analyzing the possibility of ordering, also, garments such as jumpsuits and jackets with reflective strips.

Parallel to this debut, today at 8:00 p.m. several groups of Tucumán motorcyclists will carry out a new mobilization in Plaza Independencia in opposition to the use of vests.

“As a biker, I am also concerned about safety due to the number of motorcycles that change lanes, come against me, and do not wear a helmet or a patent. We are also affected by accidents, but to combat them what we need are more controls”, stated Andrea Maidan, member of the motorcycle group”Unión Rutera MG”.

The use of the vest

The garment will be regulatory for drivers and their respective companions. In the future, the use of the vest will also be borne by the cadets and the dealers. As an additional measure, the latter will have to add reflective stripes on the boxes of their motorcycles. Over time, Romero will expand the mandatory nature of the reflective vest to the employees of the gomerías.

In addition to the vest, the use of the shoulder straps is also valid (a kind of light girdle that intersects the back and comes in orange or yellow). Another option is to resort to various clothing models made with high-visibility materials, such as jumpsuits and jackets that already come with built-in reflective stripes. Similarly, we can buy the light strips separately and sew them, on our own, to the clothing in question.

The colors allowed in municipal regulations are pure yellow, and yellow, orange-yellow, and green. The important thing is that the vests contain more than one reflective band (at least five centimeters thick) and that the fabric is sensitive to light. Regarding measurements, these garments should be 60 centimeters long and 35 centimeters wide, with a reflectivity of 330 lux candles per square meter.

The acquisition of clothing

The vests and shoulder bags are sold in automotive businesses, such as distributors and motorcycle parts stores. Another option is to visit a local specialized in work clothes and construction. Also, there is a street sale of reflective vests (not that of shoulder bags), and, in online commerce pages such as “Mercado Libre” and “OLX”, both garments can be obtained in different fabric and size thicknesses (up to XXL).

The municipal resolution that establishes the mandatory use of reflective vests (or shoulder straps) for those who drive motorcycles, will be carried out in stages and gradually. Starting today, with its implementation on the streets, it will proceed to a test phase where the main objective is to inform drivers about the measure, make a call to attention to offenders and allow motorcyclists to purchase the vests.

Regardless of the town or municipality of residence of the motorcyclist, the use of the reflective vest or shoulder strap is mandatory for drivers and companions who enter the capital of Tucumán.

For now, roadblocks will only focus on driver awareness and prevention. Only in a second stage of the regulations will the fines be determined and the amount of the penalties will be set. The Undersecretariat of Traffic and Transport clarified that the hijacking of the motorcycles is not foreseen and that the inspections will be comprehensive, checking the use of helmet and lights besides.