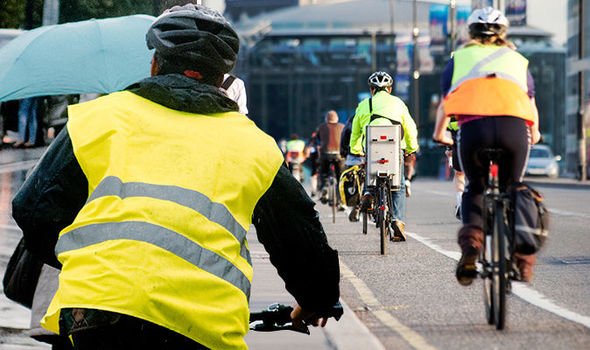 A study confirms that accidents between cyclists and vehicles are caused by a combination of inadequate infrastructure and risky behavior by drivers and cyclists.

According to the Colombian Traffic Police, by September 2017, 42% of the accidents with cyclists that had been registered that year had occurred in the night hours and involved cyclists without a reflective vest.

In recent years, more and more people around the world have chosen to use the bicycle as a means of urban transport. However, many abstain from talking about it due to the danger that often involves moving with this means of transport. the scenario is not exclusive to Colombia: in the European Union, for example, in the last 30 years accidents between cyclists and vehicles have suffered a systematic increase.

According to the Institute of Legal Medicine, in Colombia in 2016 there were 4,447 accidents involving bicycles; in 589 of them the cyclists died, and 3,858 were injured.

“Given the characteristics of the vehicle and the little use of passive safety measures, cyclists are, along with pedestrians, the most vulnerable road users to suffer serious injuries in the event of an accident,” Sergio Alejandro Useche, a researcher at the Research Institute of Traffic and Road Safety (INTRAS) of the University of Valencia.

In urban centers, it is where 70.7% of accidents and 67.4% of victims’ injuries or deaths occur, compared to rural roads, where 29.3% of claims and 32.6% of the victims. 47.2% of serious cyclist injuries occur on conventional urban roads.

To understand the increase in incidents with cyclists and to be able to develop preventive policies, a study led by Useche has analyzed the relationship between roads and human factors with traffic accidents. The results, published in the magazine Sustainability, show that, in collisions between motorized vehicles and bicycles, both factors are present. These data could serve to explain and prevent road accidents.

The researchers interviewed 1,064 cyclists (38.8% female and 61.2% male), on average 33 years old and from twenty countries in Europe, South America, and North America, in an online survey. According to the expert, the increase in accidents with cyclists is due to “the widespread use of the bicycle, which is still disorganized, poorly controlled and unregulated today, and rarely linked to the education and road training of its users,” emphasizes the investigator.

Scientists highlight the need to intervene in infrastructure to reduce problematic interactions with other users, which occur when cyclists must share roadways with the motor vehicle or pedestrian users; simplify circulation on friendlier roads; and strengthen the culture of bicycle use and respect for it in all users.

On the other hand, the researchers have observed that in the traffic codes “there is a worrying lack of regulations to regulate the use of the bicycle in shared mobility with other types of vehicles.”

Regarding individual or human factors, the study highlights risk behaviors, divided into two main types. The first is the so-called unintended errors or failures by drivers. “These can be reduced by carrying out adequate road training, as is done, for example, with motor vehicle drivers,” says Useche.

Another behavior observed in accidents is traffic offenses. In the opinion of the experts, it is essential to strengthening road training by cyclists and drivers to avoid them. “This requires the support of the media, institutions and the educational system,” conclude the authors, for whom this would improve public health and social coexistence between the different mobility systems.