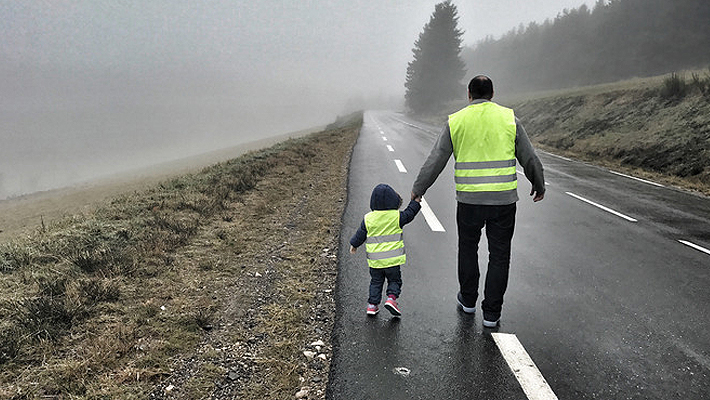 Pedestrians are four to five times more involved in an accident in winter than in the spring and summer. Especially now that the clock is back, the police and ANWB are calling pedestrians to wear lighting or reflective material.

More accidents happen in the dark winter months. However, new accident figures that the AD has requested show that pedestrians in particular are much more at risk in winter. In winter, there are four to five times as many collisions with pedestrians than in spring and summer. Cyclists are involved three times as often in the winter period in accidents.

Egbert-Jan van Hasselt, who is responsible for road safety at the National Police: ,, We have been paying a lot of attention to lighting on bicycles for years, but the pedestrian has been underexposed. ” The police officer calls it ‘an eye-opener’ that the pedestrians the statistics stand out like that. ,, We call the pedestrians: wear lighting or reflective material! Make sure you are also visible to your surroundings as a pedestrian. ”

The ANWB also supports the call. ,, From this weekend on the wintertime starts and you run more risks because of less visibility ”, explains ANWB spokesperson Annelids Titular. “Be sure to be aware of crossings and make sure you are clearly visible.” Every winter it is certainly about collisions with two hundred pedestrians. However, because the registration of accidents with pedestrians lags far behind that of motorized traffic, it is possible to see many more people who crash when they take part in traffic on foot.

Often, according to the police, people who leave in the evening, for example, let their dog out in a dark coat on unlit paths. The combination of ‘bad light, bad weather and dark clothing’ makes pedestrians ‘almost invisible’ is according to Van Hasselt. “Even if you walk safely on the side of the road, if a car driver does not see you are without a chance.” The Association of Insurers emphasizes that it is particularly useful in rural areas to wear reflective clothing. “Certainly if there is no free cycle path or footpath, road users are at risk,” said spokesperson Rudi. “There are many claims from the province, villages and outlying areas. ”

According to insurers, children are often involved in accidents in the dark, especially when it is raining or drizzling. ,, It often concerns older children who are on their way by bike or on foot to the football club or violin lessons ”, explains Bugs. Now those children are still in the light to the sports club, but because of the wintertime, it is already dark from tomorrow. ,, People soon think: well, it is only a small part that enlightenment will come later ”, Bugs continues. “But the injuries they incur are sometimes serious and that is also a rehabilitation period.” According to Veiling Verger Nederland, lighting or reflective clothing for pedestrians is of extra importance, because drivers are increasingly busy with other things, such as the Smartphone, while driving. VVN spokesperson Rob Stomp horst: “Reflective clothing can then ensure that a motorist still sees such a pedestrian or cyclist.”

Safe Traffic Netherlands developed in cooperation with Hama the clothing line ‘Be Seen’, with for example reflective tape on clothing and boots. The Finnish police, in cooperation with Veiling Finland, devised a reflector on a string for your coat or your bag. A pedestrian, without reflector, is seen with dipped lights from 20 to 40 meters, while a pedestrian with reflector is seen from 150 meters away. Van Hasselt: “A motorist then has more time to respond. It would be nice if this became just such a craze. ”