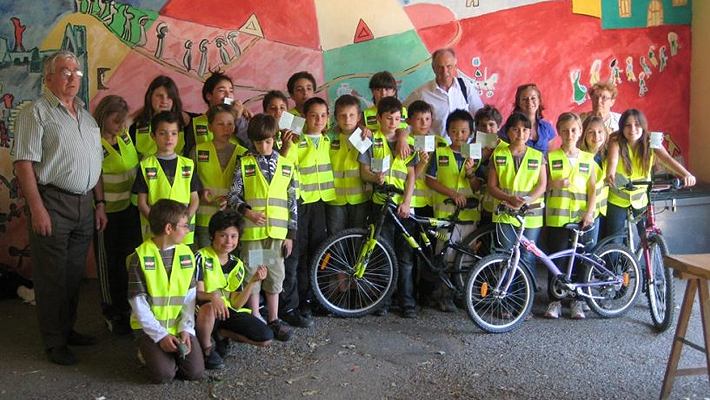 On Tuesday, June 22 at 4 pm, the children’s cycling diploma of the CM was awarded. They received from the hand of Mr. Gerard Mousse, prevention officer MAIF, and Marie and Sabine, of the town hall of Flour, their cycle license and a reflective vest.

It was reminded some rules: throughout the school year, children were made aware of the problems related to pollution (global warming, gas emissions), bike settings and equipment, responsible behavior to adopt, traps to avoid, such as blind spots, unsafe conditions or “bad surprises”.

After a little speech reminding them of the rules for road safety they had seen in class, all the children had another surprise. Mrs. Joëlle Mouysset and Mr. Denis Joulia, Departmental Delegates of National Education announced the latter, it is their participation in the flowering schools and to their surprise their record has retained the attention of the jury that has sent the file for the national competition but the results will be known only in September.

We will have to wait until the next school year to know if our children have had a prize, what we wish them. Big thanks to Mrs. Roy who accompanied them during this school year on these projects and congratulations to all the children, all of them have a reflective safety vest.