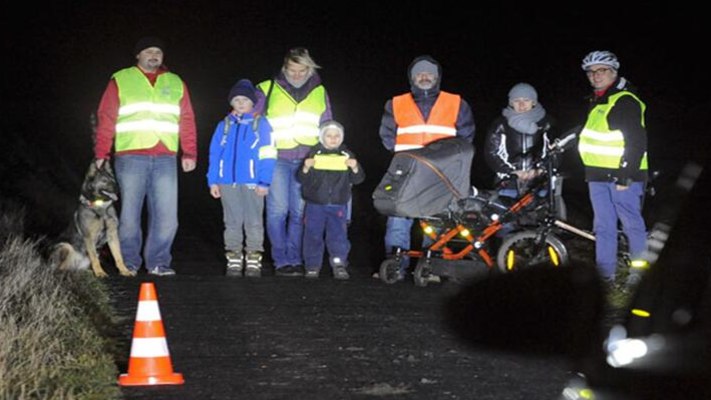 In February starts paying for pedestrians must wear wearing reflective surface. But no one intentionally does not say how they look, and besides shops full of Snitch.

You would have to live abroad or Mars to hear about new obligations for pedestrians in the Czech Republic wear wearing reflective elements outside of the village in reduced visibility. In February will be released in the Official Gazette and will then pay for 15 days.

The approval process took so long about it for months talked media, politicians and policemen rejoiced as it is a good idea if the measures will bring at least one life saved.

In autumn began a campaign this year is to distribute half a million reflective strips, 100,000 bags for the elderly and tens of thousands of young shining shoelaces. The number of victims they are really questionable, after all, in the dark last year killed 72 pedestrians. This speaks good experience from abroad where such an obligation exists for years and the number of dead is really rapidly decreased. Will it in our country?

The publication storm, unfortunately, went down to the essentials: properly define what those “retro reflective elements” are and how they look. “We have, for example, fluorescent materials that enhance visibility in daylight and at dusk, in the dark, however, lose their function,” describes the pitfalls simplified search Basil boss Martin pastor. Moreover, we found that not every light green or orange work vest wearing real retro reflective elements – those that reflect light at night and warn the figure in the dark!

Experts transport legislation, although suspects that the term “retro reflective” figures in the situation an emergency stop of the vehicle outside of the village or the allowable label departments pedestrians in poor visibility, but implementing legislation depicts examples of working orange “overalls and jackets with the word” school, which in both cases, hardly clothed road users.

In addition, the passage of the new designation, this link is missing. They stumbled upon it already MPs during the vote. “Retro-reflective materials – it is very hard words, and I admit that I’m a little confused him. It is a word of Latin origin. Reflect means flex turning round, re – back. How can I translate retro Reflect, I do not know. I turn around, bend back, back. Or cornering, bending backwards. I wonder in whose clever mind, this term was born, “he commented MEP and linguist Daniel of TOP 09.