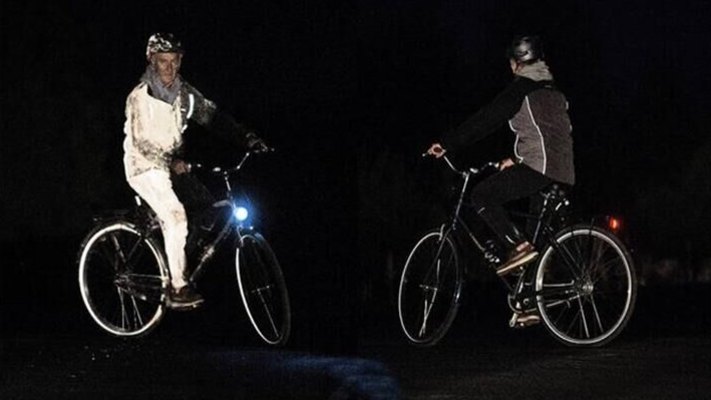 Life Paint named Volvo’s controversial reflective spray for cyclists and pedestrians. By spraying the contents on clothes, helmet and bike will be almost luminous.

Life Paint has not only aroused enthusiasm among the riders. In Sweden it was born through a resistance movement against the security gadget in social media.

But first, let’s take a look at the product.

HBL’s cyclist patrol searched a guaranteed pitch-dark road in Espoo forests to see how the spray works in practice. And yes, it works.

We started to spray the right half of my synthetic cycle jacket, my cycling shorts and helmet with reflective spray. The left half we left untreated.

We spared no spray and the first jar à 19.90 emptied us fabrics. With the other can we sprayed the bike right half of the frame, tires and fenders.

Then it’s off into the woods. The flash from the mobile camera mercilessly reveals that we cheated in the painting. After some minor corrections, we go out in the field.

The idea is that I should cross the highway on the darkest place imaginable.

When I turn the untreated side towards the headlights of about a hundred feet away, it appears that the bicycle tires have a narrow reflective stripe, as well as the jacket. The overall impression is still that I have seen very badly.

When I turn the page sprayed on the headlights look, however, I like a luminous ghost. A ghost that pops up out of nowhere and that certainly might scare some nerve weak motorist in the ditch.

But it is obvious that the reflex spray gives visibility.

On the bicycle frame seems spray caught badly. It should perhaps have been dry for a while. On the decks the other hand, stuck good and they reflect the light strongly.

According to the manufacturer, the color will disappear gradually in the wash.

We have chosen black clothing because the instinctive feeling says that ninety per cent of cyclists do too. On the way out we who’s been a dozen bikers in the dusk along the roads and all have been wearing something dark.

When I pull on a pair of white jeans and a grange bike jacket caught me at a distance by the car’s headlights. The effect is almost as good as with reflective material spray.

Life Paint has not surprisingly attracted heated debate in our western neighbor, where the riders ask themselves if it is only their obligation to take safety measures.

In the widely read “Cyclist blog” in Stockholm, writes blogs Christian Dillinger and Jerome Golfers that of course it is good that cyclists are visible, but they are split in their approach to products Life Paint.

“How miserable is designed with an operating environment which requires other road looks like lit sparklers to reduce the risk of being hit,” they ask themselves.

It is not about visibility. It is about respect, about the ability to put themselves in the situation of other road users, to make efforts to adjust their driving to surrounding traffic. Or, shit man in second and only on gas, help no color in the world … People are no longer satisfied with ordinary lamps, but the flashes as Christmas trees on the streets. But not Stockholm traffic has become much more considerate of it, “the duo.