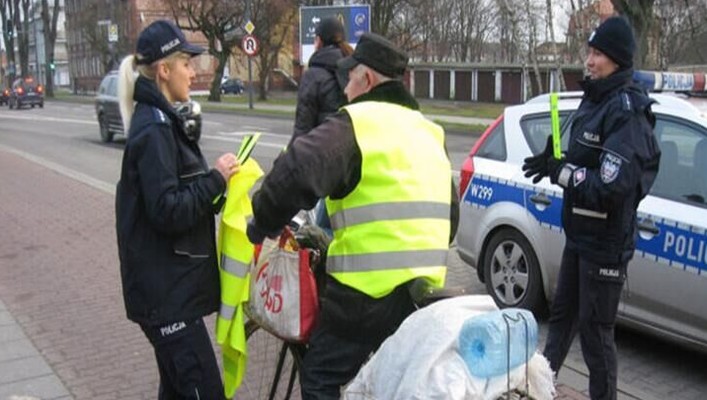 Reflectors can save your life – argued about it yesterday with pedestrians and cyclists. While conducted in several areas of the city runs uniformed distributed safety vests and reflective bands in the framework of the project “Traffic Safety” financed by the Swiss-Polish Cooperation Programmed, as well as from the Office of the City of Swinoujscie.

-Using before Christmas atmosphere of police officers from the Municipal Police Headquarters in Swinoujscie conducted yesterday in several areas of the city share distribution vests and reflective bands. Their customers were vulnerable road users – pedestrians and cyclists – explains Beata Olszewska the Swinoujscie police.

Months autumn-winter period is very dangerous. Quickly the gathering dusk, haze, rain and snow, and thus limited visibility, have a definite impact on the safety of pedestrians and cyclists.

Officers encouraged using as often as glare, because such an object formed on reflective clothing for pedestrian or cyclist enough to their road safety improved significantly.