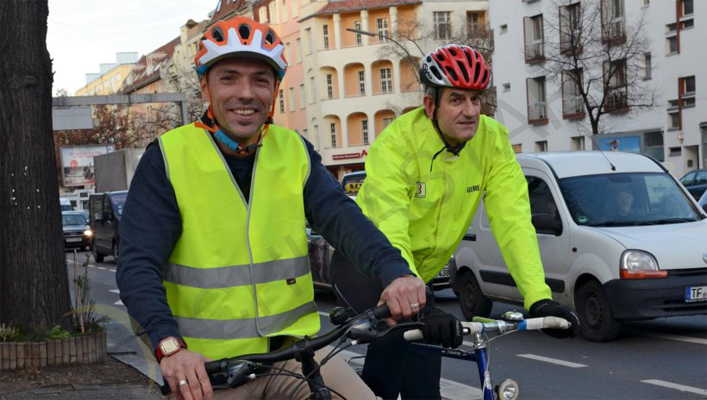 The German Police Union wants to introduce in Berlin reflective safety vest for cyclists. This triggers a new discussion on more road safety.
Many cyclists are in the dark without a light on the road, endangering themselves and other road users. Especially during the winter months when it is already dark early, many cyclists are easily overlooked. The German Police Union Berlin (DPolG) is now demanding that cyclists must wear by nightfall on a reflective vest.
“With safety vests are cyclists more visible in the dark,” said Bodo Pfalzgraf, state chairman of the DPolG, the Berliner Morgenpost. “Therefore, it should at dusk and at night give a compulsory use of safety vests.” The demand came at a symposium of the radio car driver together in meetings with officials of the traffic monitoring. Berlin cyclists would race especially in the evenings without light through the city, they say. “The excuses are mostly the same. The light is only just broke,” Pfalzgraf reported from the experience of officials. “Particularly brazen is the excuse it passing anyway nothing.”
The advocacy of the cyclist, the General German Bicycle Club (ADFC), the union demands a critical view. “Who wants to make cycling safer, must take care of safe cycle lanes and, through public relations work for a good traffic environment. The show international comparisons such as with Copenhagen or the Netherlands,” said Stephanie crown, spokeswoman for the ADFC. “Those who feel as a cyclist on the streets welcomed and respected, adheres better to the rules. The lighting requirements for bicycles is sufficient to ensure the visibility and visibility of cyclists.”
The police union seeks to initiate, in calling a political discussion. “We are intensively for our idea to get lives, advertise” Pfalzgraf said. Support learns the union demand of the CDU faction in the House of Representatives. “Yes, without restrictions Yes. I am quite clear for safety vests mandatory for cyclists from nightfall,” said transport expert of the CDU, Oliver Friederici. “This is very much security for little money.” Cyclists who are not seen in the dark, would frighten often pedestrians and drivers and in danger. “I am an ardent supporter of this idea.”
Green are skeptical
The Green Group in the House believes that the proposal in everyday life will be difficult to implement. “The proposal of the police union is certainly well-intentioned, but impractical,” said the transport spokesman for the Greens, Stefan Gelbhaar, and referred to Leihfahrradsysteme. “Then takes every cyclist anytime rumtragen a reflective vest with him.” Always new demands would bring in his view nothing. “Better is a functioning lighting on the bicycle and adequate controls.”
In road safety not only the cyclists should be reminded of their duty, he said, and calls for better infrastructure for cyclists. Especially at intersections would happen very many accidents. “There is still a lot to do.” Also the transport spokesperson SPD, Ole Krein, based on voluntary. “One should think and educate about wearing the vests on a voluntary basis,” he said. “To make         Wearing a duty, I see skepticism in Berlin.”
The ADAC relies on higher education, attractive clothing, reflective materials and voluntary rather than a “bureaucratic safety vest duty”. “Vests with reflective tape worry among cyclists for much better visibility in the dark. Especially in Berlin already many cyclists wear reflective vests voluntarily and are therefore safer on the road,” said Volker cranes, ADAC board member for transport in Berlin-Brandenburg. “Lighting and visibility are equally important for all road users.”
The ADFC still leads to another argument and calls for more inspections. This showed the example of the city of Münster. There, ADFC spokeswoman Stephanie crown Lichteinschaltquote of 40 percent (2007) to 97 percent (December, 2014) could be increased by checks.