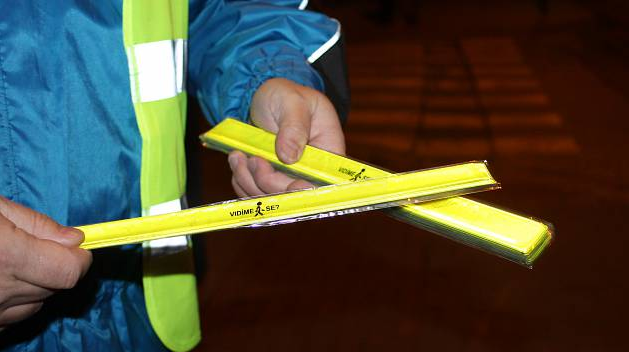 Penalties are imposed on poor clothing on the road outside the inhabited areas. Being well visible in the dark is also true for horse riders. For safety, reflective clothing is also recommended in cities.

Several times a week, a laborer Milan from Teplice goes to work by car to the industrial zone near Krupka. Morning and evening. Pedestrians often pass by unlit roads between Srbice and the industrial area. “They do not have reflective elements and they are not very visible,” Milan described. According to experts, dark clothing is very dangerous especially in the current weather, when there is frequent fog.

The law speaks clearly in this regard. “On roads outside the municipality, the pedestrian is obliged to wear reflective material elements so that they are visible to other traffic participants,” said Daniel Vítek from the Teplice Police.

This is the case of the road from Teplice towards the industrial zone near Krupka. That’s why the police went there for a preventive check these days. “Two people went this way without being seen. They were fined 300 crowns,” said the policeman.

According to Josef Šejbl, who had been in charge of the Teplice traffic police for many years, a dark-skinned pedestrian is hardly visible to the driver during the daytime and offers almost no room for safe evasive maneuver. “In the gloom, the driver even needs about 200 meters for a safe maneuver after seeing a pedestrian at a speed of 75 km / h,” said a transport expert.

Safety elements outside the village must also have a person who goes to the side of the dog or riding a horse. “I ordered a month ago that all those who ride our horses in the afternoon and evening from the riding stables to the stables on the road must wear reflective vests to be visible to the drivers,” Petra Svobodova from the Sports stable Úpořina said.

During the last four weeks, several car-pedestrian clashes have occurred in Teplice. This was mainly because the man on the road did not have reflective equipment and was not visible to the driver from a sufficient distance in the dark.

The police warn of this. For example, in Masaryk Street in Teplice on the marked crossing in mid-November, a car and pedestrian clashed and the ambulance had to be transported from the place with suspicion of serious head injury to the hospital.

There are even several crossings in the spa town, which are not visible in the evening despite the illuminated street lamps for drivers. For example, on a busy road along with the theater at the intersection with Lipová Street. “It happened to me several times that I had to apply the brake at the last minute. I just didn’t see a man there. He ran out of the park. He was wearing black trousers and a dark jacket,” said the bus driver Lukáš.

The turn of November and December is a risk period in terms of transport. A regional spokesman for the ambulance Prokop Voleník even describes him as one of the riskiest periods when he goes more into accidents. They occur in cities where the obligation to wear reflective elements is not prescribed by law. According to the police, the pedestrian must be well visible but also here.

“That is why we also appeal to those who move in municipalities, especially in poor visibility, to use reflective elements, thus reducing the risk of collision. He protects his life and health,” said Daniel Vítek from the Teplice police.