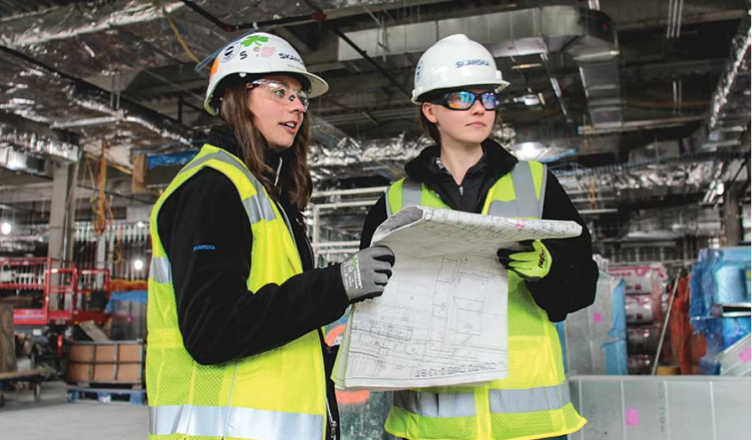 Recent efforts to provide properly fitting personal protective equipment to women on construction job sites are highlighting the connection between safety and long term careers in skilled trades and management.

“If someone doesn’t feel safe or doesn’t have the tools or equipment they need to do their job, it’s going to be very difficult to keep them engaged and feel like they’re going to succeed on the job site,” says Allison Scott, director, Autodesk Construction Solutions. “We think there’s an opportunity here to talk about safety and specific safety equipment for women.”

Autodesk partnered with Associated General Contractors to create a grant program that will provide AGC members with funding to purchase safety harnesses suitable for women. The program, which debuted Nov. 12, will accept applications until Jan. 10 to fund about 300 harnesses. While there are no set limits on the number of harnesses applicants can receive, nor on specific brands, grantees are required to schedule training in their use, as well as on proper fitting PPE and fall protection. Grantees are also asked to describe plans to recruit and retain underrepresented populations in an industry where women currently make up less than 10% of the workforce, says AGC spokesman Brian Turmail.

For Carly Hayden, a safety manager at construction management firm Columbia, North Reading, Mass., finding workers wearing improperly fitted gear is not uncommon during on-site inspections of subcontractors. “A lot of times they don’t know it should befitting a certain way, which is a little unnerving because they are supposed to be taught how to wear a properly fitting harness,” she says.

Compounding that is the size and type of fall-protection equipment that companies purchase. Hayden says certain styles, such as a cross-body harness that hooks in the front, are better suited to women’s frames. But those aren’t always available. Hayden describes job sites “where it looks as though somebody has just gone to Home Depot to grab a harness just because it was easy to access and relatively inexpensive. I think a lot of it comes down to cost,” she adds. “A lot of the models that are more geared to women … they’re pricier.”

When Jarrett Milligan, a vice president of environmental health safety at Skanska, learned that a female employee had been in the field outfitted in oversized gear—a potential hazard—he decided it was a problem the company could solve directly.

Milligan was dissatisfied with the PPE options for women that he saw. Many were missing common features such as extra pockets, and space to clip on a microphone or put a notebook. Skanska turned to its PPE vendor Colony Hardware. Using feedback from a meeting where Skanska employees tried on an array of safety vests, Colony and manufacturer Radians created a prototype. Female employees at Skanska field-tested them and further adjustments followed. The vest was made available in May and can also be purchased by other firms. “We have almost all our female workforce in them,” says Milligan. Skanska spokesman Chris Villari says it’s a small gesture with a big impact. “We acknowledge and respect this new influx of women into our industry,” he says.

Skanska is now testing a three-season jacket design in the field, with a raincoat test to follow. “We’re looking at anything we can get our hands-on,” says Milligan.