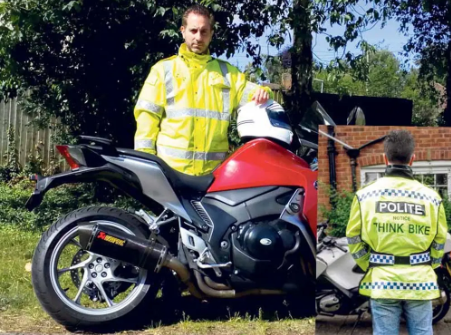 The motorcyclist should visually emphasize his presence on the road, preferably with reflective material elements – there is no doubt here. They usually appear when drivers choose quite controversial designs, which are associated with the uniforms of state services, such as very popular vests with the inscription “Poland”.

Although the inscription “Poland” itself is not controversial in any way, everyone driving behind, before they can read it, automatically slows down. Large numbers of Polish motorcyclists are happy to use it, although there were cases when the police officers had a serious problem with it during the inspection. Anyway – our resemblance to officers does not end with these innocent yellow safety vests. There sometimes appears the inscription Police, referring to the city near Szczecin. There are also blue reflective stripes attached to the sides of the vehicles. This is an evident stop.

In any case, dressing up in this way usually ends with an instruction. A completely different situation has recently taken place in Great Britain. 47-year-old Darren Emanuel, a respected financial advisor, rode his BMW R1200RT wearing a white helmet and a vest with the inscription Polite (polite) and a characteristic checkerboard pattern. What’s more, his motorcycle also came from a police demobilization – so we have a ready set that heralds trouble.

The motorcyclist was stopped by a passing police patrol and strongly advised of the impropriety of his actions, and then released. Darren, convinced of the legality of his outfit, decided to complain to the police station. At that moment a real avalanche started.

He was officially accused of attempted fraud and the case went to court. The insurance company found out about everything and canceled his motorcycle policy. The court admitted that Darren did not want to cheat anyone, but the case was conditionally discontinued and ordered the motorcyclist to pay court costs, in the amount of over PLN 3,000. The worst, however, is that because of the accusation, his contract at work was not extended, and when the owner of his rented apartment learned about everything, he also lost his roof.

So as you can see, it’s worth taking care of your safety, but more thoughtfully.